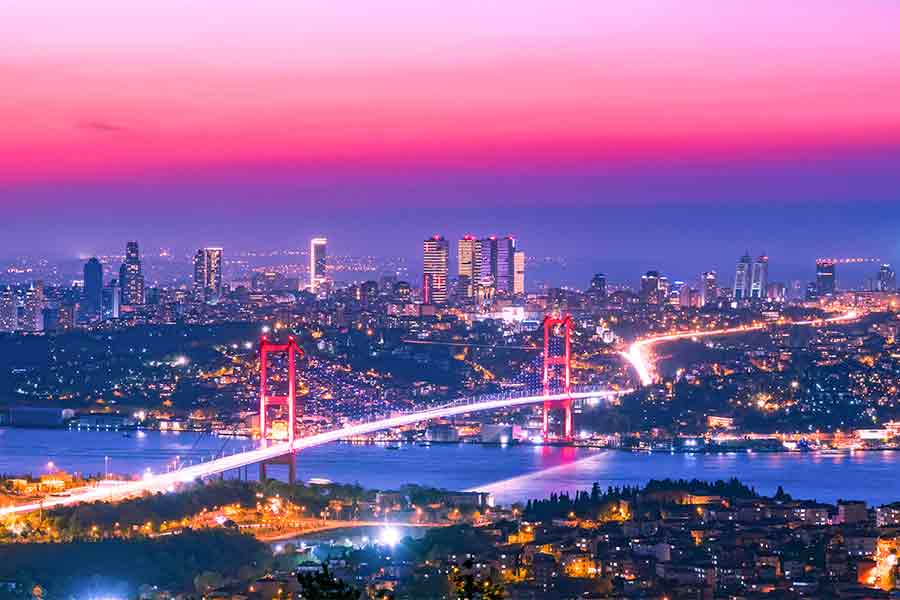 Istanbul, Turkish İstanbul, formerly Constantinople, ancient Byzantium, largest city and principal seaport of Turkey. It was the capital of both the Byzantine Empire and the Ottoman Empire.

The old walled city of Istanbul stands on a triangular peninsula between Europe and Asia. Sometimes as a bridge, sometimes as a barrier, Istanbul for more than 2,500 years has stood between conflicting surges of religion, culture, and imperial power. For most of those years it was one of the most coveted cities in the world.

A quick look at Istanbul’s features:

The Bridge Between East and West

No other city in the world straddles two continents; nowhere else has been the capital of two empires. This vibrant metropolis of 15 million people, sprawling across the European and Asian sides of the Bosphorus Strait, is unique. Founded by the Greeks, later capital of the Christian Byzantine Empire, Istanbul blossomed anew at the heart of the Moslem Ottoman Empire following its capture by the Turks in 1453.

Both empires bequeathed Istanbul a wealth of superb buildings, most concentrated in the old city centred on Sultanahmet. From the glittering gold mosaics of the Hagia Sophia to the cascading domes of the Blue Mosque, and from the cavernous depths of the Basilica Cistern to the Topkapı Palace’s mysterious harem, Istanbul simply oozes history.

Across the curving inlet of the Golden Horn from Sultanahmet are bustling Karaköy, Galata and Beyoğlu. Istanbulites and visitors alike come here in droves to shop, eat, club, visit galleries, cinemas and theatres, whilst the more adventurous catch a ferry to Asia and hip Kadıköy and Moda.

Istanbul has a Mediterranean climate, borderline with humid subtropical and oceanic climates. The average temperatures range from 6ºC in winter to 24ºC in summer.

The rainiest time of the year is between November and March, with an average of 15 rainy days per month.

Due to persistent high humidity, expect foggy days during spring and autumn.

June-August is peak tourist season, with hotel and flight prices rising accordingly. Heat, humidity and crowds do not render justice to the city.

March-May and September-November are great times to visit Istanbul. Weather is warm and pleasant, and you can get good deals on hotel rooms and flights. 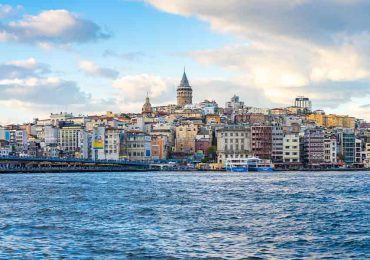 Nothing remains of the Byzantium that Constantine chose as the site of New Rome, and almost nothing is left of the mighty city he built there. Constantine’s column, the Burnt Column (Çemberlitaş), a shaft of porphyry drums bound by metal laurel leaves, still stands near the Nuruosmaniye mosque complex, but there is no proof that any building in the city dates from his period. Constantine completed the Hippodrome that Septimius Severus had begun, but it was enlarged and rebuilt by his successors until the 5th century. Only its curved end remains, with three columns along the central Spina—an obelisk removed from Egypt by the Roman emperor Theodosius I, a masonry obelisk of Constantine VII (Porphyrogenitus; 905–959 CE), and a Delphic column formed by three entwined serpents (now headless) cast after the Battle of Plataea, when the Greeks defeated the Persians in 479 BCE.

Of the myriad columns that decorated Constantinople, there remain standing the base of the column of the emperor Arcadius (reigned 383–408) in the Cerrahpaşa quarter; a column of the emperor Marcian (reigned 450–457), known in Turkish as Kıztaşı (Column of the Virgin), in the Fatih quarter; and, in the grounds of the Topkapı Palace, a perfectly preserved Corinthian column thought to be from the reign of another emperor, Claudius II (Gothicus; 268–270).

The Galata district is dominated by a massive tower that shares its name. The tower was built by the Genoese traders in 1349 as a watchtower and a fortification for their walled enclave.

When the Turks took possession of Constantinople, they covered the spines of the seven hills with domes and minarets, changing the character of the city. Like the Greeks, the Romans, and the Byzantines, the new rulers loved the city and spent much of their treasure and energy on its embellishment. The Ottoman dynasty, which lasted from 1300 to 1922, continued to build new important structures almost until the end of their line. The most imposing of their mosques were constructed from the mid-15th to the mid-16th century, and the greatest of the architects all bore the name of Sinan. They were Atik Sinan (the Elder), Sinan of Balıkesir, and Mimar Koca Sinan (Great Architect Sinan). Although the building was deeply influenced by the Persianate traditions of the Seljuq Turks, the style was blended with prevailing Hellenic and Byzantine traditions of the city. Mimar Koca Sinan’s masterpiece—and his burial place—is the Mosque of Süleyman (1550–57), inspired by, but not copied from, Hagia Sophia. It ranks as another of the world’s great buildings. Probably the most popularly known of all the mosques in Istanbul is the Blue Mosque, the mosque of Ahmed I (Ottoman sultan from 1603 to 1617), which has six minarets instead of the customary four.