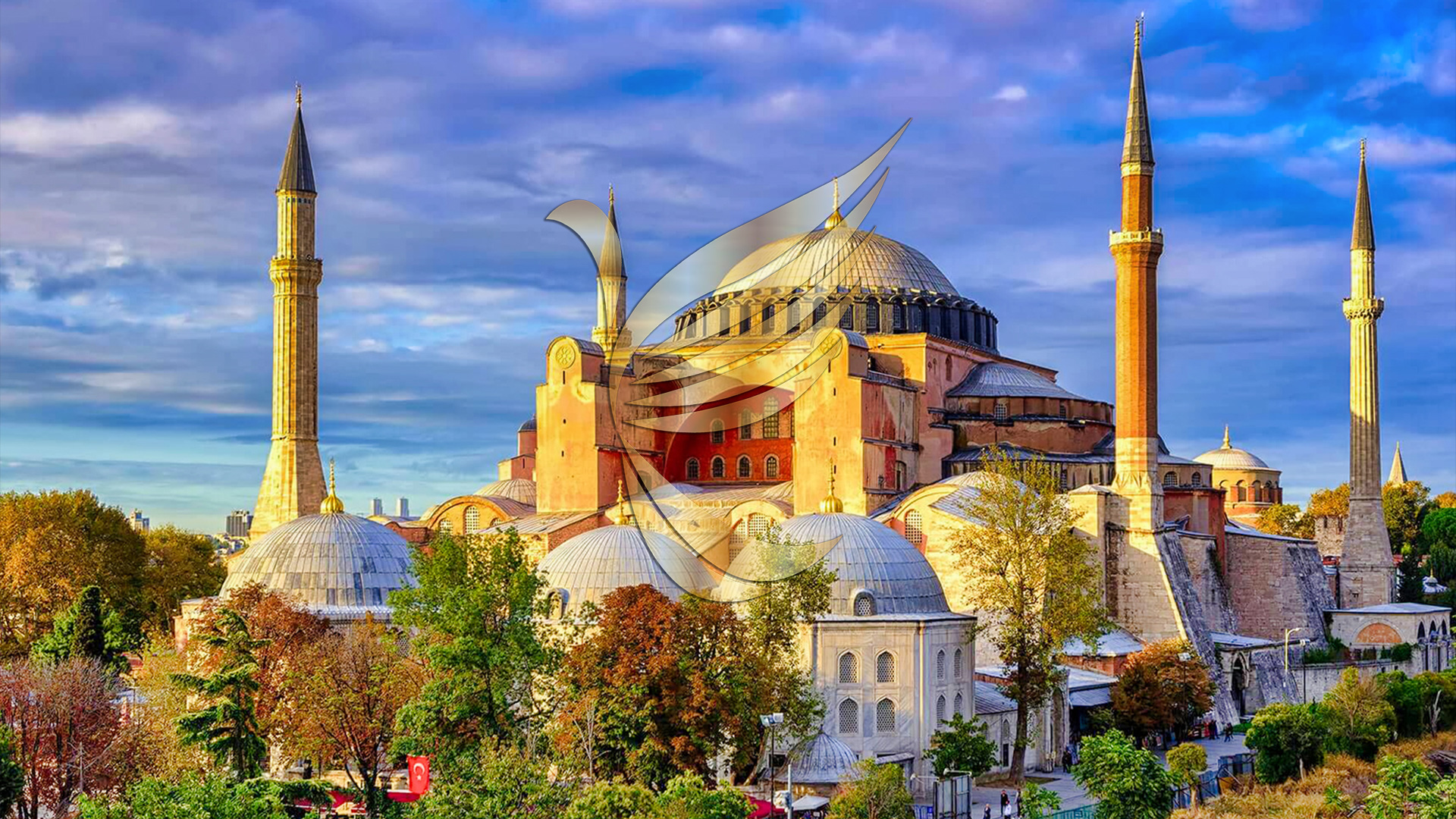 Hagia Sophia is a former cathedral, a former mosque and now a museum located in Istanbul, Turkey. It is one of the most prominent examples of Byzantine architecture and Ottoman decoration. Emperor Justinian began building this church in 532 AD, and it took about five years to build, when it was officially opened in 537 AD.
The church was built on the ruins of an older church erected by Emperor Constantine the Great. The old church was burnt down in a riot, which prompted Emperor Justinian to begin erecting this magnificent church. The building of the Hagia 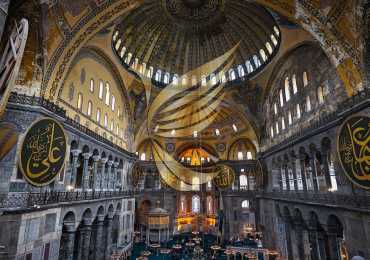 Sophia Church was in the domed basilica style. The length of this huge building is 100 meters and the height of the dome is 55 meters, meaning it is higher than the dome of the Pantheon, and the diameter of the dome is 30 meters.
Justinian began building this church in the second half of the year 532 AD, completing it with a dedication ceremony on December 26, 537 AD. Justinian did not want to build a church in the familiar style, but was always inclined to invent the new. He commissioned the architects Miletus of Isidoros and Athemius of Tracies to build this huge religious edifice, both from Asia Minor. To erect Byzantine buildings. He brought stones to build the church, columns, and marble from Egypt, Baalbek, Oboa, Athens and Rome, and spent 360 million gold francs on it, and 10,000 workers were used in its construction, until it was said: “This building has not been seen since Adam, and it cannot be built anymore.” On May 7, 558, in Constantinople, the flat dome of Hagia Sophia collapsed due to an earthquake. Justinian I ordered, immediately, to rebuild it.

The Hagia Sophia Mosque occupied a prominent position throughout the times of the Ottoman Empire, and the sultans paid all the attention and care to it, especially since Sultan Mehmed the Conqueror had prayed two units of thanksgiving outside the church after the conquest of Constantinople. He ordered that it be transferred to a mosque within three days, so the first Friday prayer was held inside it. All sources of history and narrations transmitted between the tongues of the Muslim Turks until today indicate that the conversion of the church into a mosque took place on the same day of the conquest in May 1453 AD, and a pulpit and a minaret of wood were added to it with a fatwa from the Sheikh of Islam and the fatwa scholars in the Ottoman Empire, when Muslims faced a problem in Performing Friday prayers and the collective prayers.
With the emergence of a strong need to perform collective prayer among the conquering Muslims in a Christian area that is completely devoid of mosques and taking into account the natural conditions of the city in terms of cold and rainy weather throughout the year and the snow of the winter season, all these circumstances were behind the issuance of a fatwa permissibility of converting it to a mosque and benefiting from it instead. Who left it as deserted. The Sultan Al-Fatih issued his royal orders to remove the cross from the top of the dome or those located in prominent places, and a minaret was built in the church wall from the outside, and a wooden pulpit was placed on the right side of the prayer hall, and the decorations, inscriptions and Christian symbols, pictures of Jesus and Mary, peace be upon them, were left. On the walls and ceiling unchanged to this day. The Turks had put a cover over these pictures, but they revealed them when the building became a museum, and beautiful pictures were also found, some of which represented the figure of Christ and the Virgin, and pictures of a number of rulers. 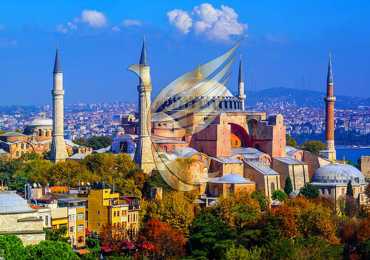 The Ottomans also placed a group of Qur’anic panels, in addition to four huge inscription panels of almost circular shape at the top of the four main columns and in the belly of the dome from the side of the mihrab, on which were written the words “God, Muhammad, Abu Bakr, Omar, Othman, and Ali.”
Museum design
The building of the Hagia Sophia Church was in the domed basilica style, and it takes a rectangular shape with a length of 76 meters from east to west and 72 meters from north to south. The Temple of the Pantheon, with diameters of 87 and 30 meters between east and west, and 87 and 31 meters between south and north, and covering a floor area equivalent to 700 square meters with sides 70-100 metres. While basalt and granite were used in the construction of the foundation walls or walls, the central dome rests on four huge, circular granite columns about 3 meters in diameter and high. The mosque has one large door open to the west, and it does not lead directly to the inner courtyard of the mosque. Rather, the person passes through a rectangular courtyard before entering the mosque.
At the end of this rectangular courtyard from the north, there is a door that leads to the internal staircase leading to the upper floor. It is a unique staircase located inside the building, as it does not include ascending steps, but is a wide spiral staircase that lifts one up in a simple and gradual way that depends on walking. In spiral corridors, the floor takes the form of a flat ground floor. From inside the Hagia Sophia, one sees the stained glass windows in the wall facing the qiblah. This historical building is characterized by the phenomenon of the upper floor. The Ottomans followed this constructional style in most mosques and mosques that were built after the conquest of Istanbul to this day. This floor or something like a balcony surrounds the sides, except for the east side, where the mihrab is. The images of Jesus and Mary, peace be upon them, still occupy their place in the belly of the dome and the upper inner walls of the mosque to this day without change or removal.

The dome of the Hagia Sophia is very beautiful and was considered a development at the time, as it was a huge dome that had never been seen before, and seemed to be suspended in the air. This was quite natural, as the Byzantine engineer had the ability and vast ancient experience and knowledge to invent what is remarkable and new.