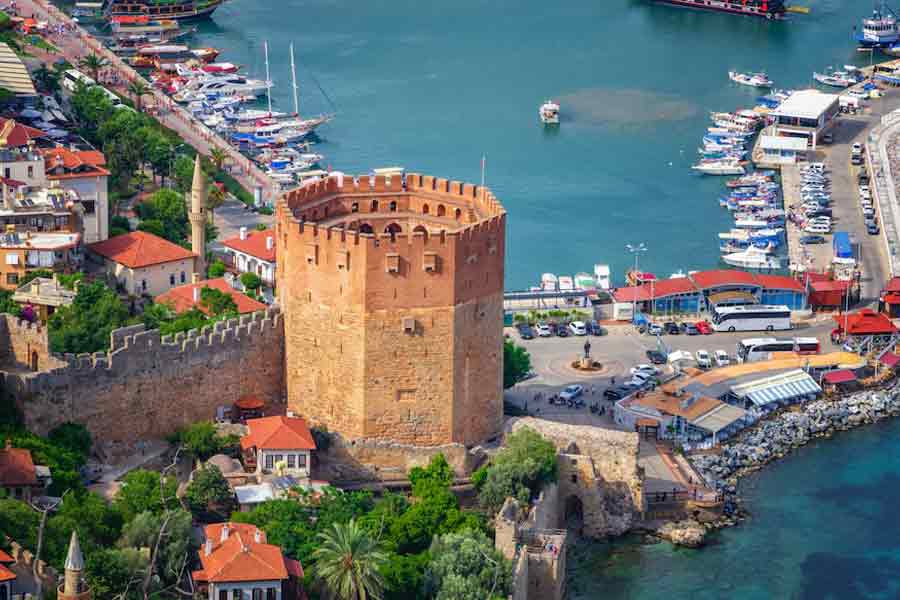 Top Antalya Things to Do

What is today the largest resort on the Turkish Riviera was founded on a rocky piece of coast by a King of Pergamon in the 2nd century BCE as a harbour for his powerful fleet.
In the centuries before, cities had cropped up nearby, all over the ancient Pamphylia region, some falling to Alexander the Great, and some resisting his conquest.
The magnificent ruins of Termessos, Perge and Aspendos are tantalisingly close, and have also given up many thousands of artefacts now on display at the excellent Antalya Archaeological Museum.

Antalya is being developed at a dizzying rate, with malls, glitzy hotels and beach clubs crowding the coastline east and west of the city.
But there’s also spellbinding natural splendour to be found, at waterfalls, luxurious beaches and the colossal Bey and Taurus Mountains.

The Best Things To Do In Antalya

With the preserved streets of its old town a hive of history, the huge selection of idyllic beach hotels geared towards utter relaxation located along its coast and the ruins of Roman fortifications only a stone’s throw away, there are plenty of things to do in Antalya.

Lying around ten kilometers east of the historic center, Lara Beach is a lovely spot to simply kick back and relax while taking in some rays. With the Mediterranean Sea lapping at the shore as you bask in the sun, it is a peaceful place with lots of tourist facilities, so you can easily grab a drink or sit down for a meal at one of the nearby restaurants.

Tucked back from the limestone cliffs that edge the main harbour, Kaleici, Antalya’s Old Town has been well-preserved by the Turkish authorities and makes for an excellent relaxed afternoon in the city.
Here, Roman ruins rub shoulders with elegant mosques, including the Yivli Minare Mosque, a beautiful building easily recognised by its huge, 13th-century minaret that towers over the surrounding area.

Olympos and Cirali share one spectacular beach. This makes it people assume they can easily commute between the two but it is not the case. There is a river that divides the 2 towns and it takes 30-40 mins to walk or drive from one the other.
Nature wise they are the same, it looks like a post-card from Thailand with its white beach and lush forest. You can swim the crystal clear sea and watch Caretta turtles nest. So the area is under strict protection. No construction is allowed in the ara. That is why you will only see shacks and cottages but no hotel developments. So far, both towns sound alike but indeed they have different characters.

Easily one of the most iconic spots in the whole city, the unmistakable Hadrian’s Gate is the main entrance into Kaleiçi, Antalya’s picturesque Old Town. Offering the perfect Instagram photo opportunity, this historical landmark was built in AD 130 to commemorate the visit of Emperor Hadrian to the city.
The gate is part of the best-preserved Hellenistic and Roman town walls in the world and features 3 marble arches and 3 imposing towers. You’ll notice some intricately detailed sculptures on the gateway, but take a closer look up at the ceiling as you walk under to see some of the most impressive carvings. 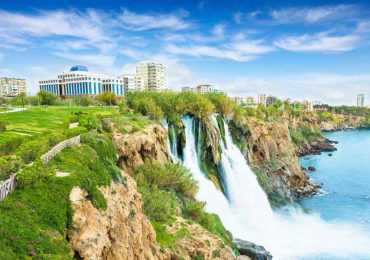 Now, the first thing to note about the Düden Waterfalls is that there are two locations several kilometres apart.
The must-see is the lower falls (Karpuzkaldiran Waterfall), set between Antalya and Lara.
Here the Düden River plunges 40 metres over the tawny cliffs into the Mediterranean.
A park has been set up to help you get the most out of this natural wonder, complete with playgrounds for little ones, scenic terraces and a zip-line crossing the river just before it hurtles over the cliff.
You can view the falls from the water on a cruise setting off from Antalya’s old harbour.
Inland, the upper falls also deserve your time, where the river spills over a small rocky ledge rich with vegetation, and you can take a path that leads you behind the curtain of water.

6. The Land of Legends Theme Park

Near Belek, a bit off the coast, is a huge entertainment center called the Land of Legends.
Upon entering the resort, you are taken into the world of fairy tales, and the concept continues throughout the entire facility. It is not for nothing that the resort is called the Disneyland of Antalya.
The huge water park offers a total of 55 water slides and an adventure park attraction with all imaginable rides, including gondola rides on the canal, popcorn, donuts stands, and fairy tale characters wherever you look.
A true paradise for children. Especially worth mentioning are the shows every evening with lights and lasers and the amazing shopping mall with more than 100 shops.
These activities attract millions of visitors each year and has been the #1 activity picked by tourists since it opened.