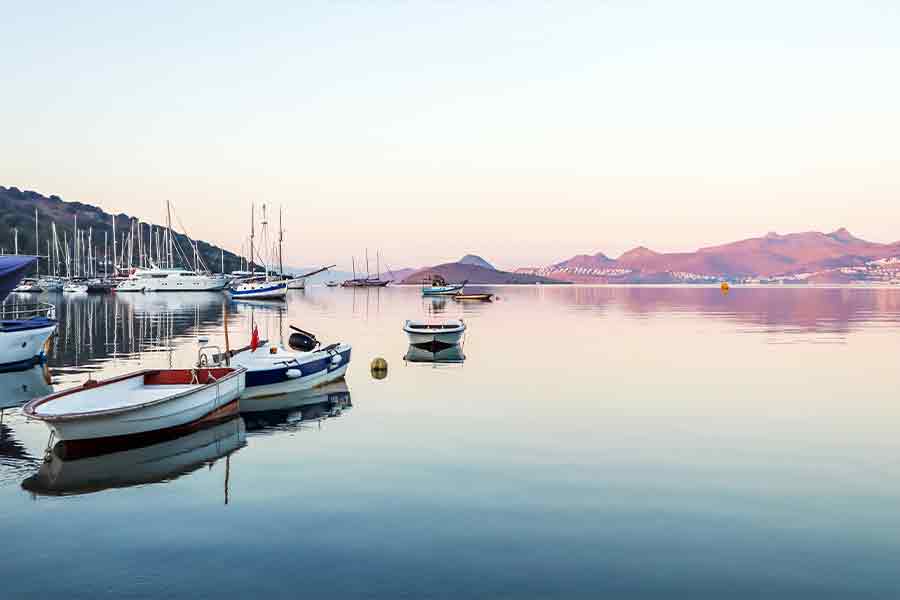 The Top Things to Do and See in Bodrum, Turkey

Bodrum is Turkey’s Turquoise Coast at its most vibrant. This unabashed summer vacation destination is known for its marina full of bobbing yachts ready to whisk you out onto the Aegean for a lazy day of coastal sightseeing between swimming stops; a handful of historic tourist attractions, if you’re looking for more things to do off the beach; and a town filled with photogenic, old whitewashed houses.
Once the ancient city of Halicarnassus, Bodrum had turned into a simple fishing village by the late-Ottoman era, but all that changed in the mid-20th century, when tourism entered the fold. 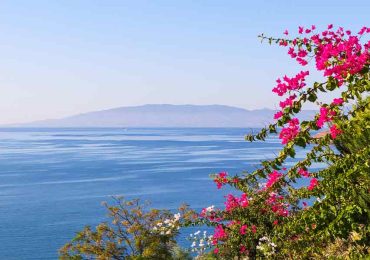 Now during summer, this town is one of the best places to visit in Turkey for sun-and-sea vacations, and it buzzes with energy as tourists come from all over the world to soak up Bodrum’s charm.
If you happen to visit out of season, though, you can still catch a hint of the old village atmosphere. Plan your time in Turkey’s premier resort town with our list of the top tourist attractions and things to do in Bodrum.
Bodrum is the most “party” resort and the capital of nightlife in Turkey. It is also famous for its beaches, and the warm Aegean Sea with the purest clear water.
Located at the junction of the world’s 2 best seas, the Mediterranean and the Aegean, Bodrum offers a mix of both worlds. It has the architecture of the Greek islands with white painted houses but at the same time much like the Costa del Sol, Rhodes, and Majorca, Bodrum has grown into a household name among Mediterranean beach holiday resorts.

Bodrum, and Turkey in general, are not only all-inclusive hotels and beaches. There are numerous historical places that gain the curiosity of the travellers. One of them is the St. Peter’s Castle, and to visit it is one of the best Bodrum things to do. St. Peter’s Castle or Bodrum Fortress is an attraction that is considered the main symbol of the city.
The construction of the castle began in 1402 on the site of the former Seljuk fortress and was led by German architect Heinrich Schlegenholt. The castle was made using green volcanic stones, and marble left from one of the seven wonders of the ancient world, the Tomb of the ruler Mausolus. It was unfortunately destroyed by an earthquake and its ruins were located close to the place of construction of the castle.
The impressive walls of the castle are visible from almost anywhere in the city. And the atmosphere inside the fortress of Bodrum gives a sense of power and majesty. This is why St. Peter’s Castle is a Bodrum must-see for those visiting the city. Well, and of course breathtaking picturesque views and the Museum of Underwater Archeology, which is located in the castle and is next on our list.

2. See how a legend lived at the Zeki Muren arts museum

Zeki Muren was a true Turkish legend who started out a strait-laced, suited singer in the 1950s and evolved into a flamboyant, cross-dressing icon whose music still rings out everywhere in Turkey today. Bodrum was his adopted home, and when he died in 1996 the ministry of culture turned his house, in the centre of town, into a museum. Come to see a collection of his outfits, learn about his life and work, and find the house preserved exactly as it was when he lived here. His impressive drawings and paintings are also on display.

3. Explore the ocean on this Scuba Diving Tour 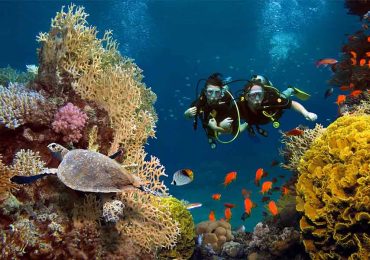 Bodrum is also known to be one of Turkey’s best diving spots. With more than 15 dive points across the city, you will surely fall in love with the scenery that is tucked and hidden underwater. This diving tour is very perfect for everyone, even for first-timers! Enjoy exploring the coral reefs and seeing the fishes and other aquatic creatures live in action as you are swimming in Bodrum’s crystal clear waters. You also don’t have to worry as you will be provided with all of the required equipment like oxygen tanks, weights, and weight belts. There’s even a lunch waiting for you after your whole adventure under the sea!

4. Stroll the Waterfront Promenade and Marina

To get oriented, one of the things to do in Bodrum is head to the marina. Take a slow and scenic stroll along its waterfront promenade and you’ll quickly gain an appreciation of the city’s strategic location as an important port for trade.
Set between two sheltered bays on the Aegean coast southwest of Istanbul, prior to Ottoman rule, what is now Bodrum was the Greek city of Halicarnassus. In modern times its promenade is a gorgeous part of a fun-filled day.
The pedestrian zone is lined with vendors, outdoor restaurants and bobbing fishing boats, cruise ships and yachts. Bill Gates often jets in to enjoy some time on his mega yacht.
In the evening, the promenade offers spectacular views of the neon sunset, illuminated stone walls of Bodrum Castle and star-lit skies.

Once one of the Seven Wonders of the Ancient World, all that remains of the Mausoleum are its ruins; over the centuries, it was destroyed by a number of earthquakes. The tomb was built for King Mausolus and apparently reached up to 46 meters in height. Its fantastic friezes led to it being celebrated for its beauty and impressive architecture.
In addition to the earthquakes, the Knights of St John carted away many of the old blocks to help build Bodrum Castle. While the ruins may not look as spectacular as the mausoleum did back in its heyday, there is a scale model replica to help you imagine what it looked like.
Its stunning aesthetics were so renowned that the design of numerous buildings and monuments around the world was based on this famed mausoleum. Occupying a special place in history, the Mausoleum of Halicarnassus is well worth a visit when you’re in Bodrum. 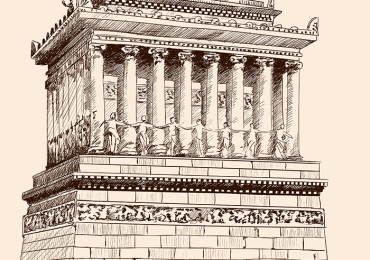 6. Soak Up the Scenery on a Boat Trip

Bodrum is all about the sea. The vast amount of visitors that arrive are here for a lazy holiday of sun, sea, and sand, but when you feel the need for a change of scenery, the most popular way to sightsee is by boat.
Hundreds of boat tours are on offer during the summer months, ranging from a day trip sailing around the Bodrum Peninsula, stopping off at tiny inlets only accessible by boat for swimming, to multi-day yacht trips down the coast or across to the Greek Islands.
Bodrum’s marina is where both public and private yacht trip outfitters tout for business, though most visitors looking for a day-long or half-day boat trip prefer to book a recommended operator through their hotels.
Even on the short day and half-day trips, you’ll be able to experience a good chunk of the Aegean’s famed rocky coastline scenery and have hours of sunbathing on board, broken up by swimming stops.

As we have mentioned above the Museum of Underwater Archeology is located inside St. Peter’s Castle and without any exaggeration, is one of the most visited Bodrum attractions. As you have probably already understood you do not need to rent scuba gear in order to visit the Museum of Underwater Archeology in Bodrum. Instead of diving into the depths of the sea, you will have to climb to the top of a small mountain, where the Fortress of Bodrum is located.
Thanks to underwater searchers, completely unique exhibits from sunken ships are presented here. The museum collection contains the “Uluburun treasure” and the world’s only golden seal of Nefertiti
HeyTripster also has a perfect plan if you plan to visit Bodrum. It includes the Museum of Underwater Archeology and other top things to see in Bodrum, which you will find below.