Ortakoy Mosque in Istanbul, Ortakoy is one amongst the nicest neighborhoods of Besiktas districts within the European side of Istanbul on the Bosphorus Strait, right under the primary Bosphorus bridge. In Turkish it means “middle village” because it had been within the middle of the strait, and through the Ottoman period it absolutely was just atiny low fishing village and a resort for the Ottoman dignitaries thanks to its attractive location. After a few years, the district continues to be a preferred spot for local people and foreign visitors.

Ortakoy has many cafeterias and tea houses around a square near the water or within the alleys, moderate or expensive restaurants, bars, small shops and a market which gets very lively during the weekends. Within the summer time there are even small size concerts or street shows etc. Many world class night clubs also are during this area, on the Bosphorus.

Things to Try to To & See

Strolling round the Ortaköy Sqaure, watching the group, having a rest and drinking tea or coffee at the assorted cafes and restaurants nearby the ocean within the company of Bosphorus is one in every of the most effective things to try and do in Ortakoy. You’ll be able to also take the boats for a Bosphorus cruise, from the Ortakoy coast, near the Ortakoy Mosque.
Ortakoy Square and Ortakoy Mosque is that the heart of Ortakoy. The road markets are vert popular in Ortaköy. They’re held in every weekend. Visitors may enjoy and buy style of handicrafts, souvenirs, used books, various great items and more.
Summer nights are very lively here as Ortakoy could be a popular 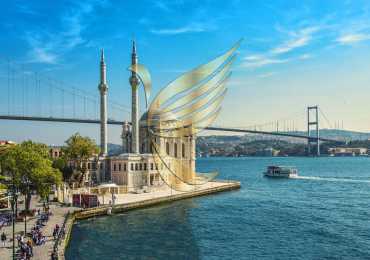 entertainment and nightlife spot of Istanbul with its form of night clubs, pubs and bars.

What are the Ortakoy Dining Options?

For fans of baked potatoes, the kumpir in Ortaköy could be a must try. For those asking ‘what is kumpir?’, it’s an enormous potato baked within the oven, then filled with an astonishing amount of various fillings that you simply make a choice from a counter. There’s a section of Ortaköy dedicated just to kumpir sellers. The Ortaköy waffle sellers are equally famous. However, if you’re searching for a more upmarket option, try Park Şamdan, Banyan Ortaköy, Zuma or Köşebaşı. Alternatively choose drinks and snacks at House Hotel Ortaköy.

Ortakoy Sqaure is popular the teenagers and Istanbul sightseeing takers. There are form of cafes, bars, restaurants and shops at the square. The lively nights at the weekends are fantastic. The Damat Ibrahim Pasha fountain and historic Esma Sultan Mansion, dating back to 18th century, are worth a see.

Ortaköy Buyuk Mecidiye Mosque, with a sublime architecture, is one in every of the foremost beautiful mosques in Istanbul. It had been built by Sultan Abdülmecit within the 19th century and offers a control of standing on the water. It’s also one amongst the foremost important symbols of Istanbul.